During Check in (make sure you bring your ID and wear comfortable shoes) you will have to wait but there is plenty to look at.  Check out the Best Picture Oscars, the History of the Studio and so much more.  There is also a Starbucks in the waiting area, so grab a coffee and get ready to see the Top 8 reasons to visit the Warner Bros Studio Tour. You will watch a short film about the studio which gives examples of what you will see during the next 3 hours.

After the film, your assigned a driver and a tour bus. Our tour guide was hilarious, I hope you are as lucky!  One of our first stops was Town Square.  So many movies and TV shows are filmed in this area. From Gilmore Girls, to Full House & many more.  To get a full listing click here.

You can explore inside the sound stages, walk through the homes and take lots of pictures.

Get ready for the 2nd of the Top 8 reasons to visit the Warner Bros Studio Tour. Are you Harry Potter fans? Well if so, you will feel like you have just entered the World of Harry Potter.  The exhibit is incredible!  There are so many items to look at. From the brooms, to the costumes and get sorted into one of the four Hogwarts houses by the magical Sorting Hat.

The Property Department was established in the early days of the Studio to house the antiques from the very first Warner Bros. productions. Today, it has grown to over 200,000 square feet and four floors of set dressing. From Casablanca to The Hangover, you’ll see history unfold right before your eyes during your journey through arguably the largest prop department in the world.

My favorites were the stunning chandeliers, sitting at the presidents desk, and the throne from the Game of Thrones set.

No 4. Batmobiles of the Top 8 reasons to visit the Warner Bros Studio Tour Hollywood

Are you a fan of the Batman movies or just love amazing cars? Well then you will love this part of the tour.  The area has been transformed into the Batcave. Now, you can see all the incredible Batmobiles used in the celebrated film series like the Tumbler the Bathammer, the BAT-POD, and Jokers Car from ‘Suicide Squad’ plus more.

Super Heroes are everywhere on the tour

Next on the list of the Top 8 reasons to visit the Warner Bros Studio Tour Hollywood is the Sound Stages. We got to see the stage where Lethal Weapon is filmed.  Unfortunately because it was a “live” stage, cameras were not allowed inside.  However it was interesting to see behind the scenes from fake wall and elevators to the police headquarters and a hospital.  It was much smaller than I thought.  We also drove by the stage were Lucifer is being filmed but didn’t get to stop so we would not interrupt the process.

I am a huge fan of the tv show Friends. Stage 48 holds the production soundstage features the authentic Central Perk set from the hit TV show Friends where you can record a real screen test and reenact scenes from one of the funniest episodes. We completely lucked out and got the opportunity to film OUR OWN SCENE, click here. to watch

Keep your eyes open for other amazing things to see in Stage 48 such as actual screenplays, audio mixing, graphic design, etc.  You will be immersed in how the magic of Hollywood is made.

Have you ever wondered how heavy “Oscar” is? I was curious also and it is actually really heavy.  It was incredible to hold it.

During your Warner Bros Studio Tour keep a look out for Stars working at the Studio.  We we fortunate and saw Conan O’Brien getting out of his Tesla on the way to his show.  He was way taller than I thought and nicely waved at us. 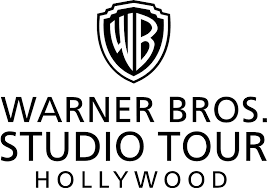 Did you know that Ellen also films on the Warner Bros lot?  Check out my post on our experience at the Ellen show. Or if you are looking to spend a another day in Los Angeles click here for my advice.  Go book your tickets now and enjoy this awesome experience too!

PS: If you want to read other blog post on my travels and adventures be sure to subscribe to Kelly Luvs

2020 all rights reserved © Kelly Luvs. are a participant in affiliate advertising programs designed to provide a means for us to earn fees by linking to affiliated sites.